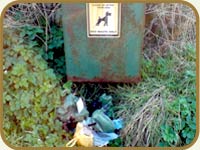 It is a common sight littering many of our pavements and pathways and can turn a pleasant walk into the extreme opposite. This is not just a social ill; dog poop left on our streets has far reaching health and environmental impacts as well.

A number of authorities are setting out to challenge the apathy shown by many owners – but which is the most effective technique – the carrot or the stick?

Many Governments have passed laws making it illegal to allow you to leave your canines poop in a public area. The question is how easy it this to police, are there the resources to have undercover dog fouling agents to catch the offenders? Often there isn’t, leaving many people bewildered by what they can do in the presence of a persistent offender.

In North Wales the Conwy Council have taken an enlightened approach to their dog fouling problem. They are faced with a barrage of complaints from local residents angry with the dog littering on the streets, which takes a sharp rise in the winter months. Apparently the irresponsible dog owners only pick up in the glare of daylight but in darkness and with no witnesses they will leave the mess. Faced with this problem and in an effort to clean up the streets and parks they searched for an alternative solution. The simple fact of the matter is that it is unpleasant picking up dog poop. And it is unpleasant carrying a bag of dog poop on your walk.

The solution – make it easy to be a responsible owner by providing the offenders with a Dicky Bag. 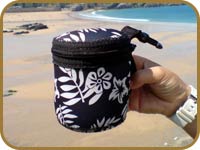 A bulk purchase of Dicky Bags has been distributed in the worst affected areas. In the past they had handed out free dog pick up bags which saw a marked increase in the number of people picking up after their dogs. However whilst the poop was picked up the full plastic bags did not always find their way into the bin. Many were left in hedges and some even hooked up onto tree branches. By promoting the Dicky Bag the Council are making it much easier for dog owners to take the poop away to the nearest bin.

Well done to Wales in leading the way forward in cleaning up their streets, we hope that many other authorities will take a leaf out of their book.